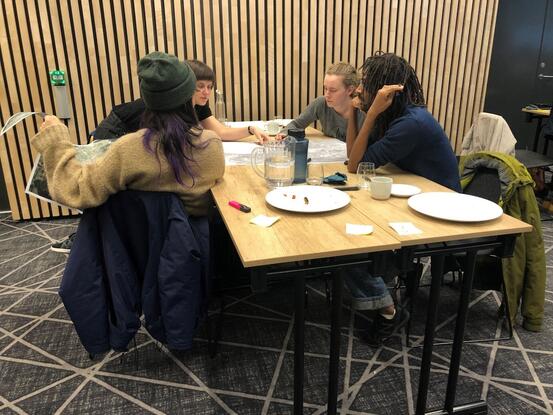 The Norwegian student organization has recommended all host municipalities and county municipalities to have an increased focus on their role as hosts, among other things by preparing a student report. With over 3000 students in the municipality, we take the encouragement and role seriously, to further develop Sogndal as a good place to be a student.

This autumn, trainee Ingrid Kristiansen has been project leader for making the student report. In October we sent out a survey that mapped different parts of student life, and based on this, a workshop was conducted on Thursday 25.11. Here the students themselves participated, HVL, Saman and representatives from Velferdstinget Vest, the latter had taken the trip all the way from Bergen to participate.

- Very nice that so many came today even though it is exam time. Maybe the promise of pizza helped to attract so many, Ingrid says with a smile. We want to create a student report and identify measures that will make their student life as good as possible.

Through group work, the students, and the other participants, had the opportunity to say something about what it is like to be walking and cycling in Sogndal, as well as how the public transport service can be better for them. Student health and student welfare were also important topics that were discussed. The most creative suggestions came perhaps when they were given a map to draw on and explain what they thought was missing in Sogndal of activities and qualities.

It was especially nice that so many of the international students took the trip.

- They have a completely different perspective and different impulses than the locals and the Norwegian students which means that we may see things a little differently, says Ingrid.

The student report will now be written, and finally be approved by the municipal council in February.

- There are many good proposals that will be considered in a larger context such as the community plan and the area plan. In any case, it is important that the students themselves have the opportunity to say something about things that concern them, Ingrid concludes.